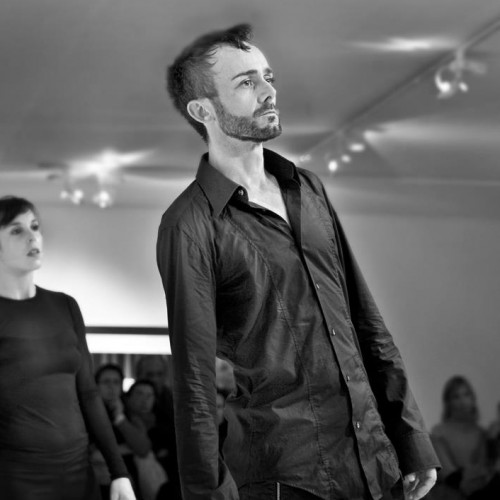 Cartagenero born in Lyon (France) on November 15, 1972 , on his early ages, he stepped up to the dance  world, starting at the Academy of Music and Dance Margarita Amante and participating in the On -Off Dance Company  in Cartagena .
In 1993, following his journey from Cartagena , he settled in Barcelona where , after four years of studies , he graduated in Contemporary Dance at the Institut del Teatre of Barcelona.
During his staying in the Catalan city, he joined different companies like Ballet Contemporani de Barcelona, Avelina Arguelles dance Company, Roberto G. Alonso dance Company and IT Dansa Company,  under the direction of Catherine Allard where he worked whith choreographers like Jiri Kylian , Nacho Duato, Ohad Naharin , Jacopo Godani , Ramon Oller, Toni Fabre, Jennifer Hanna As in a production with Luc Buoy (1997 ) .
In 1999, he moved to live in Germany and Austria, where he worked for six years as a solo dancer in different companies ; Euregio Tanz Company , Ballet Linz Company and as a Ballet Master and solo dancer in abcdancecompany attending choreographies of Nicolas Musin , Angelin Prejlocaj , Wayne McGregor, Montalvo & Hervieu , Abou Lagraa , Jo Stromgren , Tatiana Baganova , Gustavo Ramirez , Barak Marshall and Slomi Biton and under the artistic direction of renowned teachers of dance as Bruno Jacquin , Robert Poole, Jochen Ulrich and Nicolas Musin .
In 2004 , takes another step further in his career and started as a production assistant at the orders of Nicolas Musin in the production of " Zaubernacht ".
He will combine his performances with  his own productions, one of which won the Pierre Wyss Prize at the 16th Internationaler Wettbewerb für Choreografen in Hannover , as well as teaching courses and workshops in contemporary and classical dance in Barcelona, ​​Cartagena , Alicante and at the University Miguel Hernández and choreographing several flashmoves in Cartagena.
Nowadays, he is the assistant and dancer in Otra Danza Dance company under the direction of Asun Noales , also, he was assisting severals choreographies of Asun Noales in other companies , as in Jove Gerard Collins, where he was teaching stages and where he has been invited to create a choreographie, named "91 Days " and in ballet de Teatres de la Generalitat Valenciana with the choreographie "Llebeig " and at the Burgos- New York stage with the choreographie " Psalom " during his staying  in the company he has made several choreographies for Otra Danza with Asun Noales such as , “Orillas”, “Salpica-T, salpica-M”, “Óyeme con tus manos”, “soy lo que fuimos”, “zeitanschläge” and “concept”.