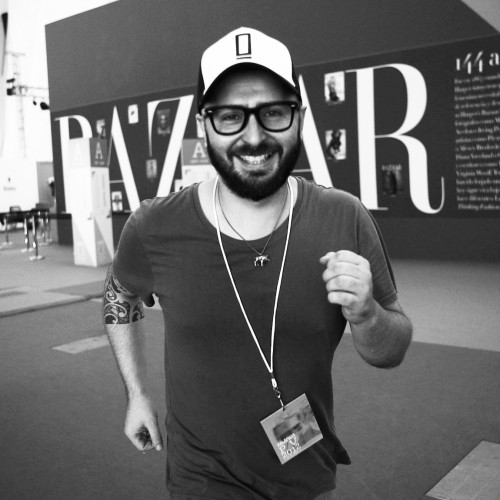 Paolo Coppolella was born in Vercelli, Italy, in 1980. His curious nature brings him to fashion world after many other experiences, such as working as educator in a psychiatric clinic till 2006, year when he moves to Spain and starts his first project in the fashion industry, an ethical project called Retal Reciclaje Creativo. In a short time Paolo, a self-taught designer, and his partner Paola Pucci achieve important goals, like being invited to participate in big fashion events such as Pret á Porter-Paris, Bread&Butter-Barcelona, SIMM-Madrid, Pitti Immagine Uomo-Florence and Pitti Donna-Milano, helping the brand to reach a bigger public and establish an international distribution. At the end of 2010 Paolo begins a new path, creating his own brand Paolo Coppolella, that not only takes the name from him, but also that histrionic character that leads him to contaminate all his projects with other forms of art, so that presenting a new collection, a performance or a Project are just excuses to to combine different arts and create synergies. His first collection "Día de los Muertos", made in almost no time, is presented during the X edition of the Valencia Fashion Week and gets very good feedback from public and press, giving Paolo to courage and straight to continue this solo adventure. He then begins to explore the international fashion world, invited to giving lectures in Academies abroad, holding workshops, and having his collections published in magazines from Japan to France, showing how specialised papers from all over the world start to demonstrate interest in this young self-taught designer. Paolo Coppolella’s collections are now present in different important stores, as well as in his personal website on line shop.